Don't get too worried about pollination as many have made this more complex than it needs to be. 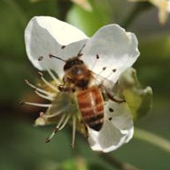 The simple advise we give is this:

If you are planting more than 3 varieties of one type of fruit tree, don't give it too much thought - you'll have no problems.

If the trees are self fertile, again don't worry - you'll have no troubles.

If you are planting just one tree in an urban area, chances are high that your neighbours have done something  similar and you'll get pollination from a nearby tree. If worried, or after a couple of years of no fruit, simply plant a couple more different varieties.

If you are planting a variety of apple that doesn't produce viable pollen (triploid), you must have 2-3 separate varieties nearby so it will set fruit.

For people who aren't satisfied with the above, we've included a longer explanation bellow. If what you read above was satisfactory, don't bother reading the part on flowering times below, as it may just confuse you.

Generally, pollination needs two things. Firstly, a variety that produces viable pollen. Secondly, a nearby compatible variety that blooms around the same time, also with viable pollen. Bees hopefully do the rest! In the case of self fertile varieties, fruit will set from it's own pollen, but this is less usual with apples and pears.

We separate our pollination into four groups:

Pollination troubles can occur if there is: a very wet or windy  spring where the pollen can't be released or received; bees are few; or if there aren't the varieties needed to provide pollen.

These are generally grouped into Early, Middle, Late and Extra Late flowering. Pollination is best from another variety in the same or adjacent group. Lets take an example: an early flowering variety will need another variety from the early flowering group, or the middle flowering group. A middle flowering variety can be pollinated by an early, middle and late flowering variety, and so on. The vast majority flower in the Middle and Late group, so as you can see for people with more than 3-4 varieties of fruit tree of one type (eg apple including cider apples and crab apples) there will be no problems. Some varieties have an extended flowing season that span Early to Late, while others if don't get pollinated may produce a second set of flowers and so increase the chance of setting fruit.

The two circumstances that one needs to watch out for are if there is a variety that doesn't produce viable pollen (a triploid) - it will need 2-3 other different varieties nearby to set fruit. The other situation is if one is planting only one tree. Again the risk is low, as in urban back yards you'll be surprised how many people have a fruit tree nearby that can pollinate yours. Or if out in the country-side, rarely is space an issue and it's safe to plant at least 2-3.

We feel this approach is much better than listing the flowering times, requiring checking each one, and fretting about pollination troubles.

Also take a look at our article on Apple Pollination.